Q&A: Pedestrians in the Bike Lane

Q&A: Filtering Up in Heavy Traffic

What do I do when there’s there’s so much traffic there’s hardly room to bike? You told me to “drive my bike”, does that mean I have to sit in traffic like a car? I thought biking would be the end traffic delays in my life? I see other bikers zigging and zagging their way through. Should I do that too? What’s the story? – Ruby

Great question Ruby! And like all good questions, a good answer requires some thought.

Filtering Up
Because bikes are so much narrower than cars, a wall of traffic can appear somewhat “porous”. Like water moving through gravel, bikes can trickle through little spaces in stuck traffic. I guess that’s why it’s called “filtering up”.

The dynamics of dense, stalled, gridlocked traffic are different than those of traffic that’s moving fluidly. There are a number of judgements that you must make as you decide to filter up in stuck traffic. Let’s look at some typical situations and weigh our options. 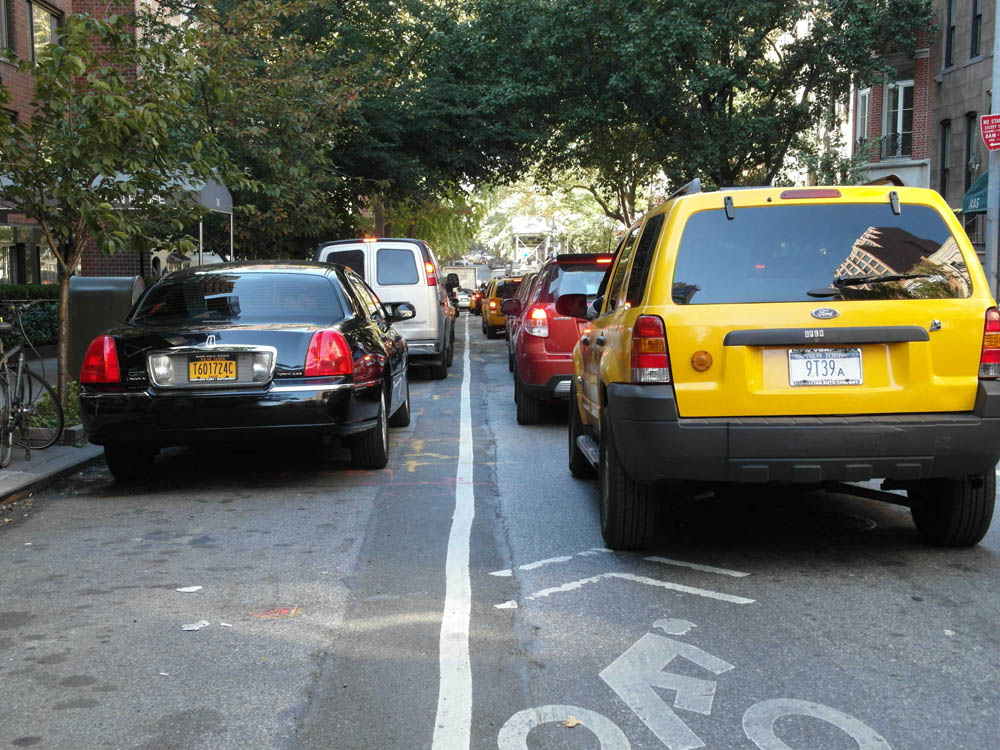 No Leap Frog!
(Narrow, one-way, single lane streets)
Let’s start with something that’s pretty clear: if traffic is moving well, it’s not ok to roll up to the front just because cars are stopped at a red light. That’s not filtering up – that’s cutting to the front of the line. When the light turns green, the motorists you just cut in front of will want to pass you in the next block, a leap-frog transaction that should not have been necessary.

At a red light, I pull up behind the cars who are already waiting there, while maintaining my lane position in front of cars who arrive behind me. This behavior communicates that I intend to include myself in the flow of traffic, making my movements more predictable to the motorists behind me. (I always signal my stops, and look back to acknowledge their presence. They do like to know that I’m aware of them) 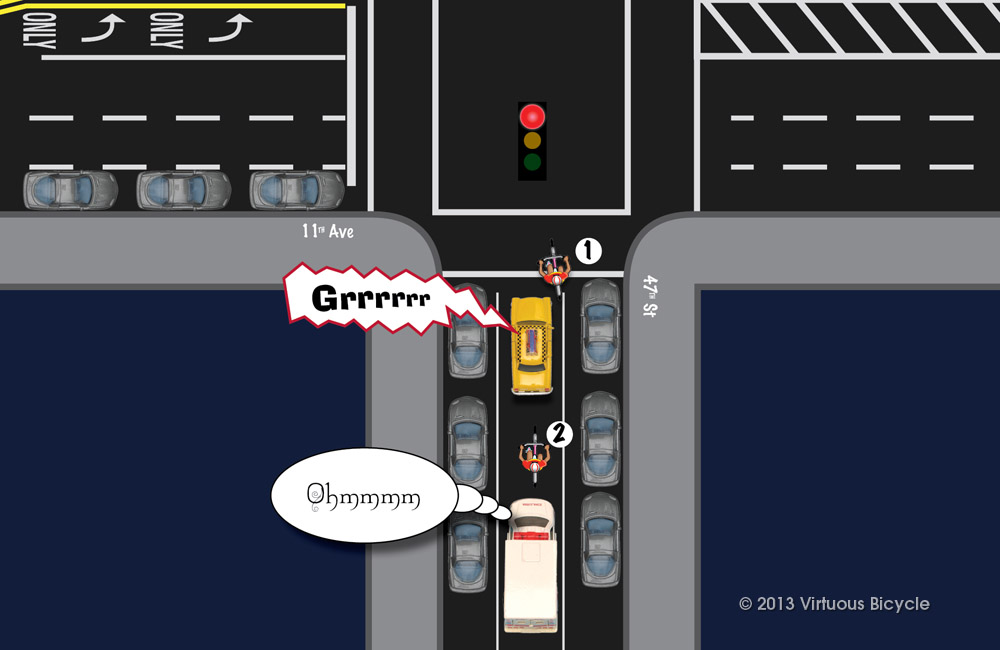 Cyclist #1? Nobody likes a line cutter. Cyclist #2 is part of the flow of traffic.

However, all this changes when the cars in front of me start turning, or they become stuck behind others who are turning, who in turn, are waiting for pedestrians in the crosswalk. As this common crosstown dynamic unfolds, I will gladly ride past them, always passing on the side opposite the direction of their turn. As a bonus, I get the next half-block all to myself until the bottleneck clears.

Crosstown, completely stuck traffic
But the question was about heavy traffic. If traffic is truly not moving you may find that there’s a narrow channel, just wide enough to ride in, between the stuck traffic and the parked cars. You can slowly move up that channel as long as you’re aware of the hazards.

It’s not a street, it’s a parking lot
When traffic is stopped, people’s behavior changes. Exasperated taxi passengers will make sudden mid-block exits. Drivers and their co-pilots will throw open their doors to run around the car to switch seats. As you ride the sliver of space between parked cars and stalled traffic you’ve now got door-zone risk on TWO sides, with vehicle occupants who perceive no danger in opening their doors. Pedestrians too, under the impression that “there are no cars coming”, will dash out from blind spots between parked vans, or even from between vehicles stopped in the travel lane. 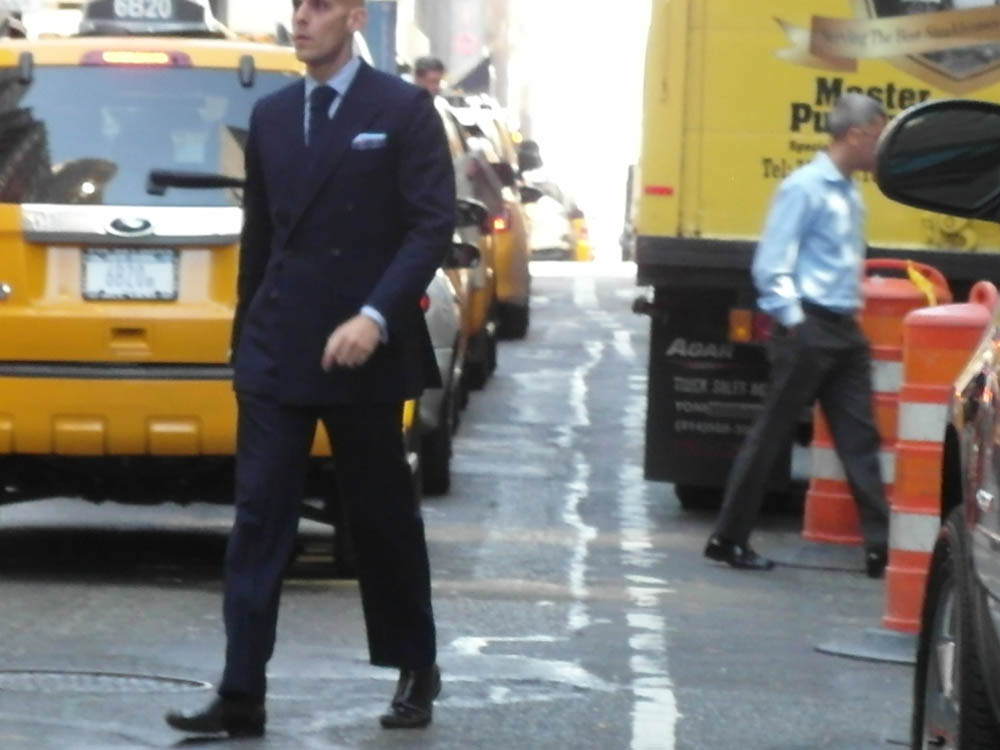 You’re moving though a tight, undefined space where no one is expecting to encounter a moving vehicle. You have limited sight-lines and difficult to anticipate hazards on both your left and right sides. You have to adjust your speed and level of focus accordingly. If you can find a speed slow enough, and a state of mind alert enough to allow for those hazards, then you can filter up along stopped traffic. (But never alongside large trucks, unless you can get the driver’s attention).

If you need to move from one side to the other to take advantage of some available space, be courteous to the motorists you’re crossing in front of. Being stuck in traffic is stressful to everyone, and motorists are humans too (many of them). They respond well to these little gestures of acknowledgment, and are acutely aware of being disrespected – remember, you may be interacting with them again in the next block.

Slowly moving crosstown streets
On the other hand, if traffic is moving, even slowly, it’s generally better to take your place in the lane and be patient. Moving cars can make quick position changes and they do not expect anyone to be alongside them. Riding in the channel exposes you to the door-zone and pedestrian walk-outs, and the narrow space requires tightrope-like bike handling stability. All this while you’re riding closely alongside moving cars. Better to take the lane.

In reality, you alternate between these two modes; riding in the channel and taking your place in the lane as traffic slogs along on its crosstown journey. Traffic moves a bit, then it’s stuck. The road widens, then there’s a double parked truck. The situation is dynamic and in constant flux. You must ride within your ability and with top-of-mind awareness of the hazards. Find a reasonable path through, but without sacrificing safety or courtesy.

Gridlock on major avenues
On multi-lane avenues that are barely moving; there are few good choices. If traffic is truly not moving, I’m talking 2nd Ave gridlock, you’re going to have trouble finding a well-defined channel. There’s no edge channel due to crosstown box-blockers and turning traffic at every intersection. The channel between lanes is ephemeral as drivers squeeze left and right in response to blockages along the outer lanes. In addition, there’s the potential for traffic to suddenly become un-blocked and for several lanes to accelerate en-mass, leaving you suddenly riding the dashed line between two lanes of moving traffic – not what I imagine you had in mind.

Few good options
I said there were few good options, but poor as they are, consider these ideas:
For short-term jams, say, approaching a construction zone for instance, then your least stressful position is in the lane, sitting directly in front of the car behind you, waiting it out. Or, maybe you could dismount and walk on the sidewalk past the tight spot. (A cool trick that cyclists should be more aware of!) In the photo of 2nd Ave at around 38th St, you’d only have to walk 4 blocks to pass the tunnel and pick up the protected bike lane below 34th St. If this is a rush hour pattern, maybe you could adjust your commuting schedule. Or find another route. 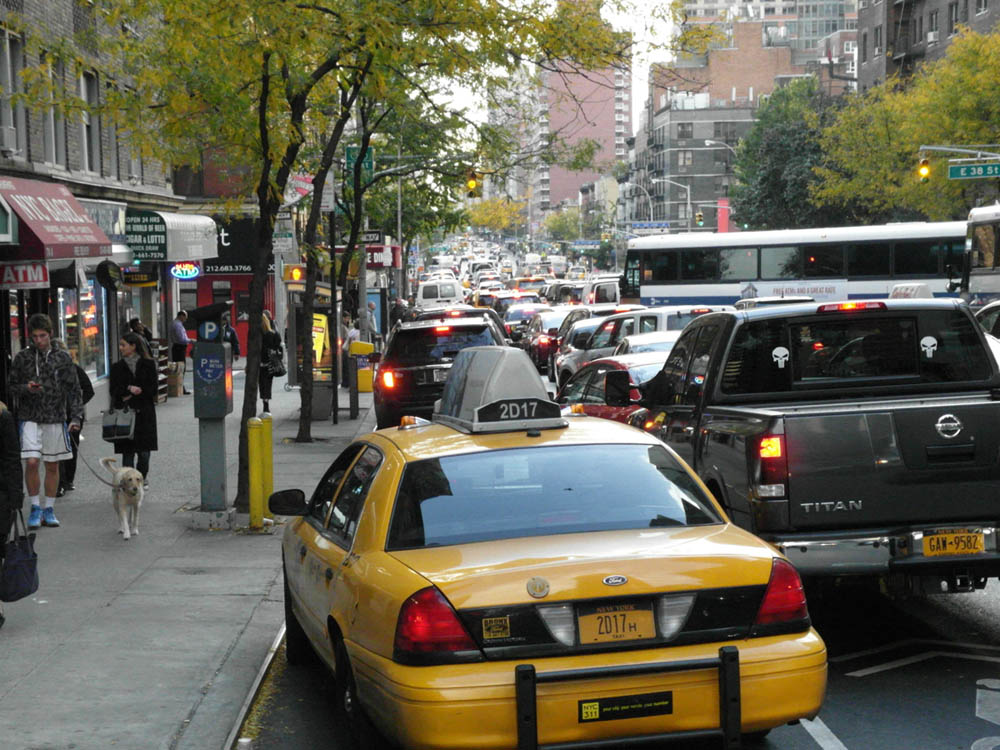 Is it worth it?
Never pleasant, filtering up is a reasonable response to heavy traffic. Anticipate the hazards in the narrow channel and throttle down accordingly. Ask yourself if you’re willing to hit a door at the speed you’re going. Eye every blind spot for a possible walk-out. Be sociable and courteous to those who’s cooperation you may need. And use the cyclist’s ace-in-the-hole; dismount and walk when there’s just no other option.

Compared to travel by car, cab, or bus, getting around in traffic is almost always faster on a bike. But even the most agile among us will be slowed by traffic. We’re not immune to the worst of the city’s traffic congestion. We’re just the answer to it.

Readers: Your comments are welcome!