Photos and Comments from RIDE BROOKLYN

Thinking about LANE POSITION– The law says bicycles must ride near the right unless it is unsafe to do so. Well, aside from obvious obstructions like double parked cars and construction zones, what else might make it unsafe to ride all the way to the right? And if we must move away from the right edge, how do we handle the traffic coming from the rear? “Far-to-the-Right” or further into the travel lane; your position on the road is referred to as your Lane Position. Lane Position is one of the most powerful traffic integration tools available to us. You can think of Lane Position as a kind of cyclist’s body language; without saying a word, your Lane Position speaks volumes. And the conversation you need to have with passing cars is about sharing, or not sharing, the Lane. Let’s “listen in” on the conversation taking place in the following diagrams.

The Lanes in these diagrams are fairly NARROW, with close to zero elbow room when a car and a cyclist are side-by-side. The cyclist is doing his best to stay out of the way as the yellow car approaches from the rear. We can hear the cyclist speaking through his Lane Position, and this is what he’s saying; “I’m not really in your lane, so come and pass me in the lane!” 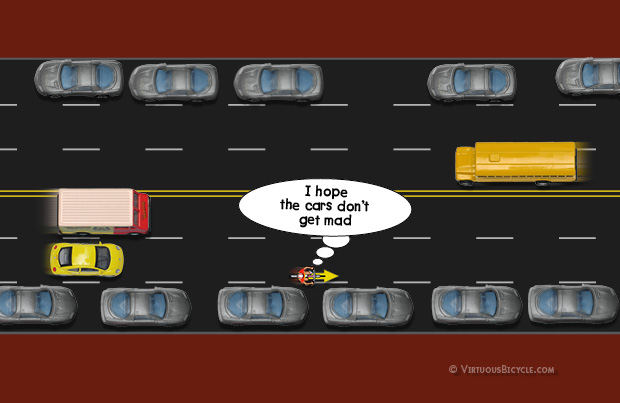 His Lane Position says “Come and Pass me!”

There’s another, slightly more subtle subtext to the dialog. At the edge of the lane, the cyclist risks blending in with All Things Non-Traffic. On a NYC street, there’s tons of activity at the perimeter, and appropriately, the perimeter is not where the driver’s focus is. So the cyclist has added this comment to the dialog; “Maybe I’m not really on the road at all!” Notice how the cyclist’s icon just got a little dimmer? 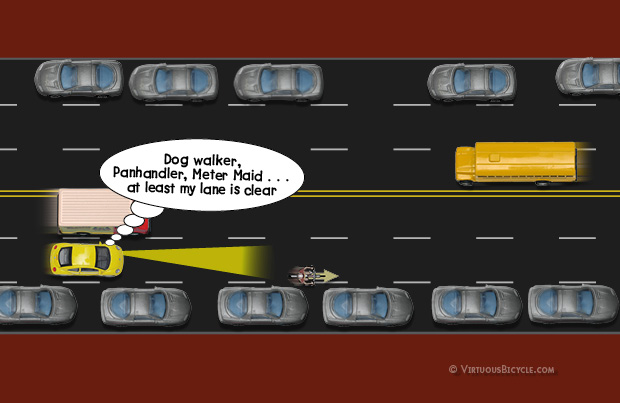 Drivers constantly monitor the Lane Position (body language) of others to read their intentions, and the message our cyclist sent has ultimately been received. As the yellow car approaches, he estimates there’s enough room to get by. But he’s concerned that the bicycle might swerve, plus he’s got traffic on his left leaving no room to maneuver. 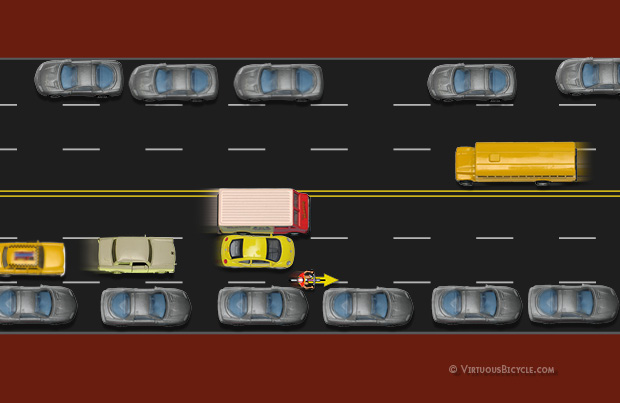 “Hmmm. This is going to be tighter than I thought”

Now the cyclist is moving even further to the right, confirming that he wants cars to pass, and as the motorist feared, that the bike’s track is uneven and unpredictable. More than anything, the motorist wants to get past this cyclist before he hits him! The driver aims for the narrow space – NOW’S HIS CHANCE – with inches to spare, he guns it. 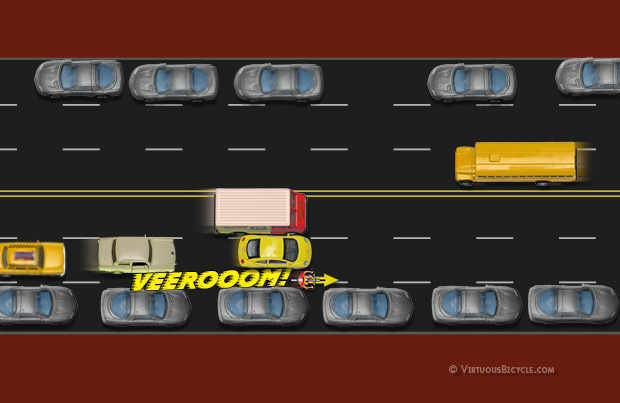 And he might throw in a good sustained horn blast to make sure you know he’s there. 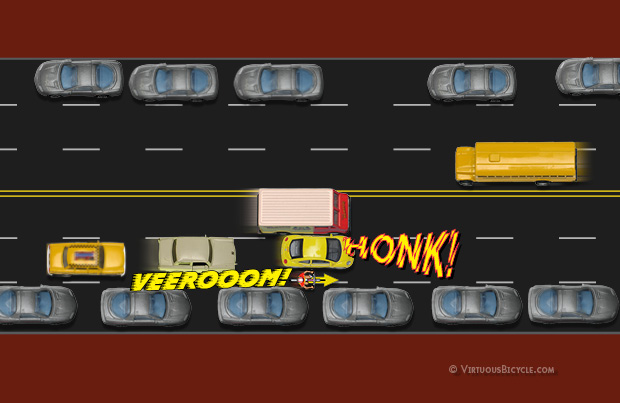 The classic Close-Pass; they come within inches and gun their engines.

Look familiar? You’d swear they were trying to run you off the road. “WHY MUST THEY COME SO CLOSE!?!!”

As a cyclists, we can anticipate these situations and take steps to prevent them from developing. Let’s reset and make an adjustment to the cyclist’s Lane Position.

Rather than trying to HIDE along the edge, the cyclist strives to ride where drivers are looking for traffic. Here, his Lane Position speaks loud and clear; “If you want to pass me, you must change lanes — this Lane is TOO NARROW to Share!” 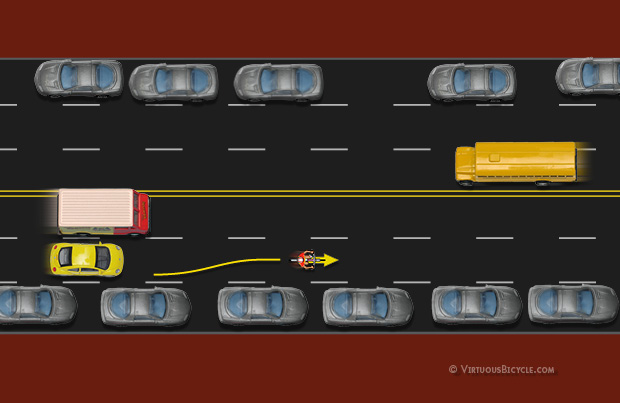 His Lane Position speaks clearly; “If you want to pass me, change lanes because this Lane is Too Narrow to Share!” 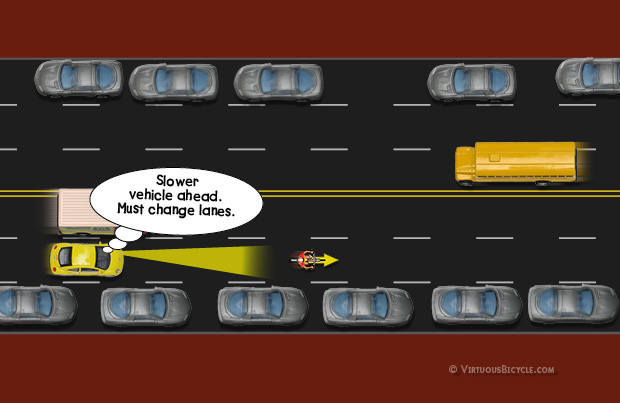 The yellow car sees you well in advance and understands that he’ll need to change lanes to pass you. NYC drivers change lanes to avoid obstacles a thousand times a day; cabs stopping for fares, cars parallel parking, turning traffic getting backed-up at every intersection, UPS, Con Ed, Fresh Direct… drivers cope. They flow around. It’s no big deal. Through your clear and purposeful position in the lane, you’ve eliminated the guesswork and helped avoid a tense and dangerous situation. 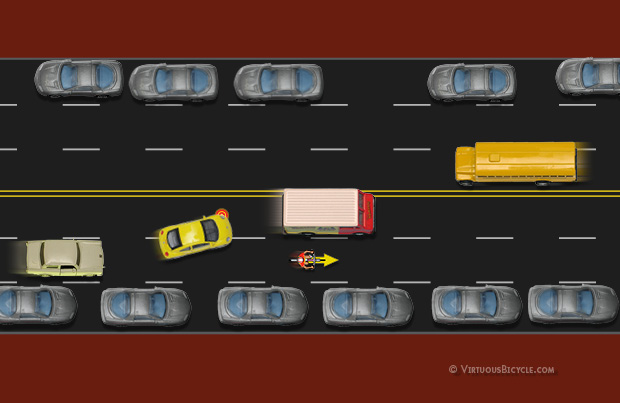 Passing a moving bicycle is no big deal

Visibility is improved to the next car in the lane as well. Experienced drivers tend to join the flow, following the car in front of them. 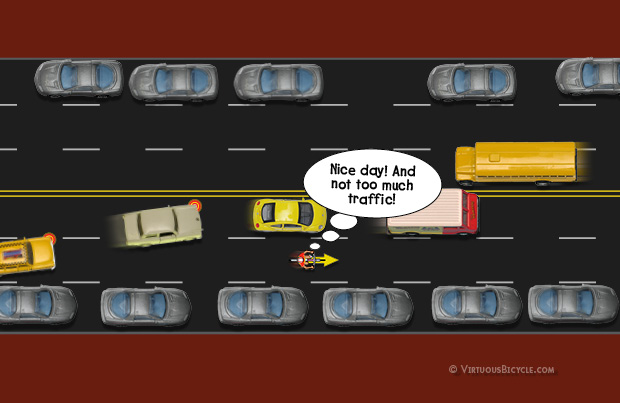 More Visible, more Predictable, more Communicative, more Cooperative.
When the Lane is too narrow to share; TAKE THE LANE

In this post, I’ve introduced the idea of controlling a Narrow Lane through a centered Lane Position, a technique known as “Taking the Lane”. There are other factors that will influence your Lane Position choices. These include the width of the lane, the distance to the next intersection, your destination (turning or going straight), your speed relative to traffic speed, even surface condition, weather, and time of day.

At all times, Lane Position is a dynamic tool, a means of communication, of negotiation, a give and take. It is the language you use in the dialog you have with traffic. You Take the Lane so that you and drivers avoid the situation shown in the diagram. You Take the Lane with authority, but with a spirit of mutual benefit. Taking the Lane is not a conflict, it is conflict avoidance. NYC riding has features that distinguish it from other rural or suburban thoroughfares. Our distances between intersections are incredibly small. Constant repositioning by both cars and bikes are required as we flow around all manner of obstacles. Rather than needing to hold a lane position over a mile long stretch, our rides are segmented, with more stopping, more lane changing and more negotiating. For these reasons, our position in the lane should not be rigid, unresponsive, or unyielding. For me, Lane Position is fluid, it’s a currency that I exchange with other drivers. I use a centered position to prohibit close passing, to improve Visibility and Control, and to avoid hazards along the edge. But when a successful interaction has been completed and as soon as I possibly can, I wave them on and I say thank you. More often than you’d imagine, they thank me back! From WNYC Sound project Bike Advice