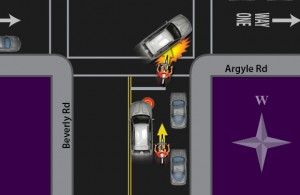 It’s called the RIGHT HOOK, and it’s one of the most startling and infuriating conflicts that cyclists experience. The Right Hook conflict occurs when a motorist makes a right turn directly in front of you, cutting you off. It’s particularly surprising because it seems like the driver should have seen you – for cryin’ out loud! He just passed right by you!!

From a technical standpoint, the driver has violated your right-of-way. From a legal standpoint, he’s probably violated regs by not allowing enough space after passing. Though the mistake may be his, fear of the Right Hook is preventing you from enjoying your use of the road. Let’s unravel the dynamics of this hazard so that it no longer takes you by surprise.

“I have only had one close call lately where a cab almost right hooked me. They weren’t using their blinker and I probably should have anticipated the turn and left more space.” — Clair

Reading their intentions
Yeah, turn signals would be great, but roadway BODY LANGUAGE speaks louder if you’re attuned to it. So, as I’m approaching a Right Turning Intersection, if a car passes me rapidly, or moves in front of me and then slows, or moves right quickly from the middle of the road; all of these things cue me that he’s thinking “make a right”.

Why do they do it?!
So, I’m the motorist,  approaching the street for my turn and there’s a cyclist mid-block. I have only a second to read the situation. If the cyclist is near the edge of the road, if she is not reacting to my approach, if she seems to be going slower than I am, I’m probably going to accelerate past her and make my turn. At motorist speeds, cyclists seem to be standing still, so once my nose has passed the bike, she’s out of my “Zone of Concern”. Right or wrong, that’s the view from behind the wheel. 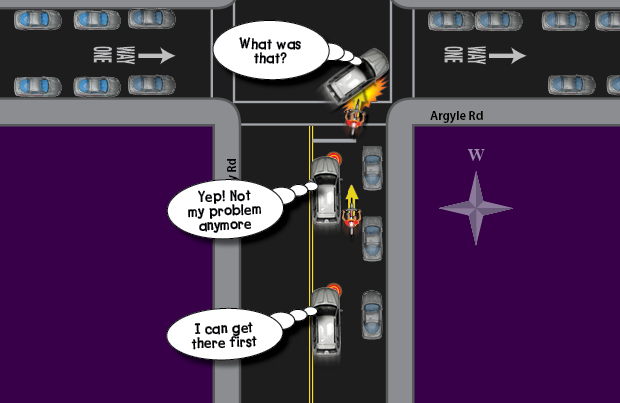 I’d also add, that after making thousands of right turns in their driving lives, motorists have never needed to check the narrow space to their right before turning.  Which is a good transition to how cyclists can change the dynamic.

Get involved. Taking Charge
First of all, approach every Right Turning Intersection with a scan over your left shoulder. THIS VERY ACT informs approaching drivers that some interaction is taking place. Make eye contact if possible – there’s something primal about having someone look directly at you – it absolutely gets your attention. 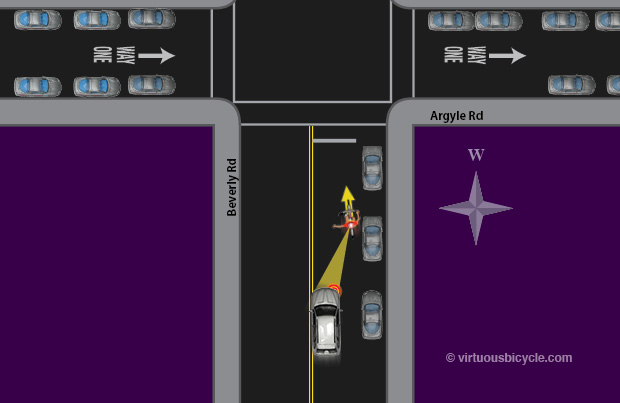 Scan back for approaching cars. As the lead vehicle, you have the right-of-way going into the intersection. But you’ve got to make your intentions known

Someone has to take charge here, and this is your chance to exercise the “Assertive” aspect of your roadway personality. Look back, Signal, and negotiate to take the lane. When you’ve been acknowledged, gently start to slide Left. Confirm once more, then PEDAL! GO! The very act of pedaling Communicates your intention – you intend to enter the intersection first!

Your eye contact and hand signal have been acknowledged. PEDAL!

If the car pulls in behind you and slows, with his blinker on (easy to see if you’re wearing a helmet mounted mirror) you can move all the way left and encourage him, with a hand gesture, to pass you on your Right to complete his turn. I’ve never had anyone object to this exchange, and I believe that drivers find it reassuring when a cyclist actively works to facilitate a smooth interaction. 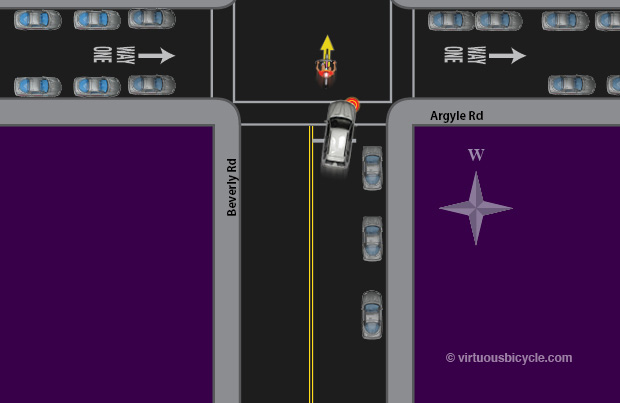 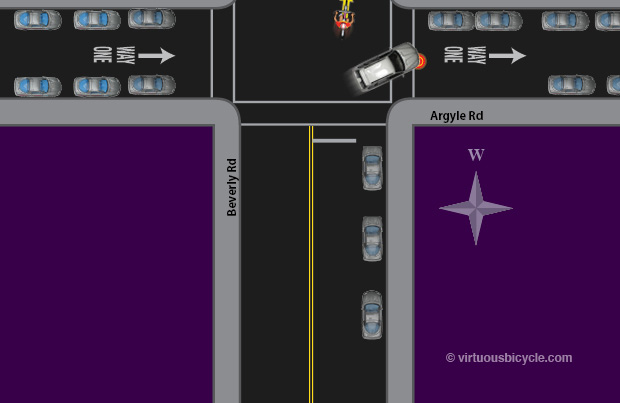 EVERY intersection is a potential friction point and it’s here that we get to exercise our most active, engaged, and communicative technique. 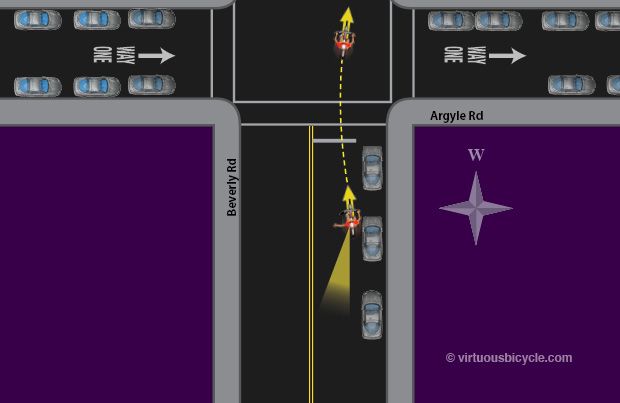 Every intersection requires a look back. Choose a path through the intersection that increases VISIBILITY to ALL traffic and reduces risk of the Right Hook.

Evasive Maneuvers!
Finally, there’s the less-scary-than-it-sounds, “Emergency Quick Turn”. If for some reason, you get stuck in the “Hook-Zone”, keep this in mind.  If you’re paying attention to the behavior of cars around you, their right turns come as no surprise. I get ready, and if indeed they do turn right,  I simply turn right too. I’ve done this a dozen times. The League teaches the Quick Turn as a parking lot skill, and it is nice if you’ve tried it in a practice environment. 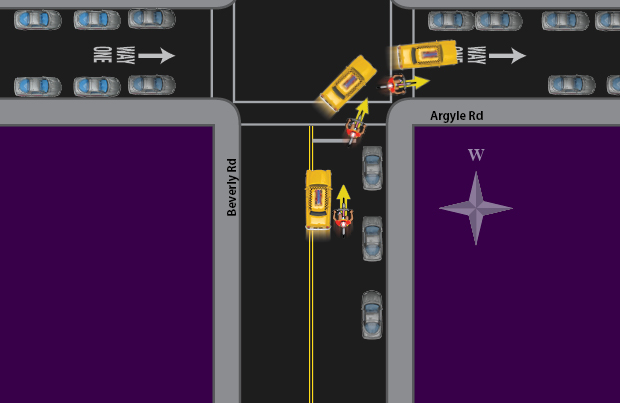 The “Emergency Quick-Turn” – Learn to do it correctly in League / VirtuousBicycle parking lot classes.

Gaining their Respect
One last word on an important underlying premise of this, and of several of my posts – that premise being; when you seek to interact and assert control in traffic, you will be both seen and respected. It’s a subject for another post, but here’s the conclusion you’ll read when that post is written: Motorists make a quick “read” of cyclists based on a number of factors including; your level of involvement, your apparent knowledge of traffic rules, your ability to control your bike, and your readiness to interact with traffic. Among the tools you have to influence these perceptions, the one they can read and comprehend from the furthest distance away is High Visibility clothing and accessories. Use of Hi-Vis presents you as a roadway user and is your first communication with drivers. If you’ve tried taking the lane but didn’t get the respect you deserve, try it again wearing a Hi-Vis traffic vest. Let me know if you don’t agree that it makes a 100% difference.